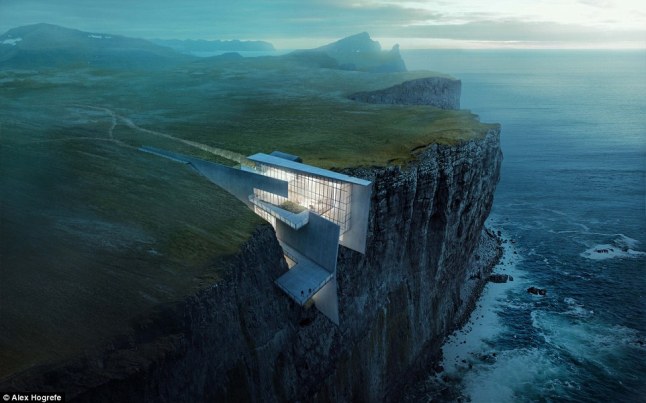 “Come and dine on the edge of the world” the brochure had offered. Steve and Maggie Malone stepped off the plane for their seventh holiday of the year. They had spent the journey in silence. Uncomfortable silence. 27 years in the civil service had aged Steve prematurely. His back was hunched and rigid,his eyes gloomy and yellow (not helped by his hip flask) and his belly the size of a space hopper.

The steps wobbled as he dismounted the plane. The gaunt figure of his wife follow loyally behind as she always did.

They stepped onto the concrete of the landing strip, tufts of grass breaking through the edges. A courtesy bus was waiting, Steve grumbled: “You’d have thought they could have parked outside the building as it’s such a small airport.”

He huffed and puffed and rolled his eyes as a Mum with two howling babies boarded the bus next to him. The bus waited for everyone to board before leaving, adding to Steve’s agitation. This was followed by an even longer wait for passport control, the luggage carousel and the car hire desk. When they finally made it to the Seat Ibiza (that the car hire firm had blatantly ripped them off on), Steve belted the car down the winding, craggy coastal road.

The sun wasn’t shining on them as the brochure had promised. Margaret was terrified every time Steve approached a bend, clinging onto the handle for dear life. But part of her didn’t care any more. Hell couldn’t be worse than putting up with Steve. Somehow the pair arrived at the hotel unharmed.

“Is that it?” sneered Margaret at the small building.
“The rest is underground you silly old cow” grumbled Steve. Margaret was used to the abuse by now. She loathed him with the passion and fury of 1000 clashing frying pans. She’d schemed to kill him a few times but didn’t know what she’d do without him. What else did she know?

They waddled their way to reception where the local island girl put on her best fake smile and gave them their key. When she sent them on their way she returned to her Whatsapp, messaging her bad boy boyfriend with the motorbike. She’d ride on the back when her shift finished. If he was lucky she’d let him into her apartment, she’d tease. But she knew full well that after hugging that testosterone along the vibrating road, she would be more than ready.

The Malones were arguing with the door lock by now, putting the card in the 3 incorrect ways before they got in. When the door slammed they huffed a huge sigh of relief. They were exasperated. With each other. The staff. Every one they’d encountered that day. Everyone except themselves of course. Nothing was going their way.

The room had been carved into the black granite cliff. A glass panel separated the room from the ocean. It was hollow and dank in the overcast afternoon light. The waves tormented and crashed on the rocks below.

“Does this place have any bloody heating?” shrieked Margaret after wrestling with her suitcase. She glowered around the room and found the Air Conditioning’s remote control. She pressed the power button with a vengeance but nothing happened.

She stomped her way up the black spiral staircase, back to the reception desk.

“Excuse me!” she yelled, dining the bell atop the desk multiple times.
“Yes Madam” said the girl, still staring at her phone.
“Look at me when I’m talking to you”

The young woman exhaled loudly, put her phone down, tilted her head to the side and stared at her bellowing guest.

“Our air conditioning isn’t working!”
“Have you tried turning it on and off?”
“Of course I bloody well have. What do you take me for? A complete and utter fool?!”
“No Madam. Ok… an engineer will come this afternoon to fix it. Ok?”

“I should jolly well hope so” she said, before waddling her way back to the her husband.

The couple then made their way to the dining room. The salmon was undercooked and sent back twice. The champagne was warm and cheap cat piss in Mrs Malone’s opinion. But they drank it anyway. How much worse could their holiday get after all?

It could indeed get worse, the pair were soon to discover. 1200 miles away on the North Atlantic Ridge, the tension on the plate boundaries was reaching a crescendo. It was time for the ultimate release. The deep walls of rock grinded and grinded against each other. Bashing this way and that. Above the surface there was nothing more than a few ripples. A few fishermen noticed some larger waves on their trawlers, but it was all in a day’s work. However the waves were building and building, the pressure behind them mounting and mounting. The pressure in front pulled up the great watery carpet of the ocean, up and up and up.

Within an hour the wave had reached the buoys of the warning systems. Alarm bells were ringing in a non-descript office. Calls were being made in hurried tones. The Mid-Atlantic islands would be notified. Planes were chartered. Sirens would wail. The evacuations would be rushed but painless.

But in the hotel room on the edge of the world, where Mrs Malone was trying to ignore her snoring husband by attempting to read a crime novel – nobody was any the wiser. The first sign that something was amiss was when Mrs Malone stopped hearing the crashing waves. She hauled herself from her bed to the window. It was quiet here for once. She was cold. That bloody engineer hadn’t come as promised and she was preparing her next angry diatribe for the useless receptionist.

She put on an extra cardigan and went upstairs but it was empty. She pressed the bell repeatedly but nobody answered her call. Her fury was growing with every passing moment.

Then she saw it in the distance.

The towering gigantic wall of water coming towards them. It was still a fair distance away. It was sucking the sea into it. She looked out the panoramic window of the lobby. She could see more the sea bed now, with it’s nobbled rocks. She panicked.

Her time was up. Their time was up. She looked through the restaurant, desperately looking for someone, anyone. She shouted but it seemed like everyone had disappeared. She considered taking the car and the keys but – they were in Steve’s pocket. Damn! The useless oaf wouldn’t move or wake up. Her will to live was draining away anyway.

She had 5, maybe 10 minutes before she’d be taken to her watery grave. Her face was an ashen picture of despair and terror and wretched putrid disappointment. Her mind went blank. She just had to wait. It was a painful uncomfortable wait. The slurping, gurgling sound of the sea was getting closer and closer. She couldn’t bare to face her killer.

Then it happened. The glass smashed. Their last memories were feeling as through they were in a giant washing machine. With that the couple’s reign of misery was over.

The rest of the islanders had escaped on planes and helicopters. The girl at reception was taken to the top of the island’s volcano where her saviour with the dark eyes and the motorbike was now romping away with her.

And the furious ocean had now settled down – it’s job had been done.